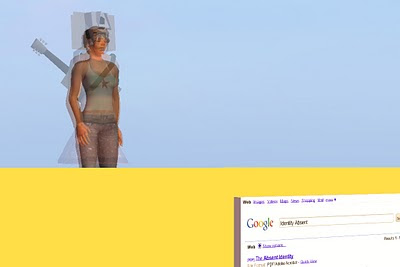 work for Brooklyn Is Watching consisting of two elements: 1) a bot (a script-driven avatar) called Identity Absent that continuously switches its appearance between the 16 default appearances supplied by Linden Labs (the pictures above shows an overlay of three different looks), and 2) a simple media-on-a-prim doing a Google search for the name of the closest avatar (to see this, you need the new Second Life viewer version 2.0 beta). if no one else is near, the search is for "Identity Absent", and will, after some time, certainly come up with the blog post that you are reading right now. read also nusch ray's blog post at BiW and watch mab macmoragh's video and read her blog post!

a new version of identity absent, called the empty chair, was shown at UWA's monthly contest as entry for july 2010 (see soror nishi's blog). identity changed appearance, when new visitors came, she greeted them, and when they tried to sit on the chair, identity would not allow them to do so, saying "sorry, but this is my chair".
identity won "The Honourable Mention Prize for MYSTERY (L$1,000)", and she was very very happy! see the official UWA post, the primperfect blog post, miso susanowa's blog, and metaverse arts.
a discussion at a forum dedicated to chatbots mentions Identity Absent several times - she is now famous as one of the chatbots (see chatroom) with the most traffic. a mail from the chief science officer of Pandorabots confirmed this.
Posted by Selavy Oh at 12:24 PM