work in collaboration with mosmax hax (Max Moswitzer) for the Scien&Art contest. big bang comes in two flavors: one for collectors, and one for exhibitions.

the collector version consists of a single object, the seed, that is given to the collector. once unpacked, i.e., rezzed from the user's inventory, the object triggers the big bang, which lasts about two minutes and results in complete self-destruction. due to the properties (permissions) of the seed object, which cannot be copied, a repetition is impossible, because the seed object is destroyed together with the big bang. thus, the work can only be experienced once and is part of the collection only as long as it is not experienced.

the exhibition version consists of a seed object, which triggers the big bang upon touching it. after teh first touch, the visitor gets the following message: "do not touch the forbidden object again unless you want to trigger the BIG BANG. triggering may violate the rules of this land and may lead to expulsion. triggering the BIG BANG will be at your own risk." after touching a second time, the message is: "probably you accidently touched the forbidden fruit again. you are warned for the last time. triggering the BIG BANG really is at your own risk!!!". the visitor can then trigger the big bang.
notes about the exhibition version, distributed in a notecard:

Forbidden Fruit: A Theoretical Model for the Big Bang
Selavy Oh
The Big Bang is the prototypical creatio ex nihilo that either seems to require the touch of a cryptic god external to itself or constitutes a mysterious everlasting cycle of creation and destruction. Here we propose the Big Bang contained in the Forbidden Fruit as a theory that unifies the expanding and contracting versions of current cosmology. We suggest that the universe created by the Big Bang is vanishing into the void, but that the creative act performed by the avatar, who assumes a god-like attitude, will start the cycle again. The touch of the creator may, however, be violating the underlying laws, the laws of physics dictated by the terms of service, and instead of being able to admire the successful creation, the creator may be punished by expulsion. Several further side effects of the Big Bang are explained by the proposed scheme: the time dilation accompanying the Big Bang can be observed in the statistics panel, the repetitive nature and limited number of the generated elements is clearly visible, the variability in size has a fractal character, and the cumulative energy consumption equals that of an average laptop computer. Finally it is concluded that the similarity in overall appearance of the generated universes clearly proves that the creative mind was not the one triggering the Big Bang, but the one inventing this concept.

"The Competition aims to expose and reward the best artworks created in Second Life to communicate scientific concepts."

Scien&Art Competition (2010)
art does not illustrate. art never communicates any concepts outside of art. if an artwork is concerned with scientific concepts, it does so in a critical discourse. art can talk about concepts and topics that are inaccessible to science. art and science are the two faces of the Janus called culture.

another way of putting it might be that art deals analogously with the state of things “beyond physics” where philosophy had to make assertions.

note: surprisingly, this work was not among the winners of the contest.
but see the blog post by zorro hirvi for another opinion, and listen to the podcast by amy freelunch!
Posted by Selavy Oh at 6:30 PM 1 comments

the inner workings of perspective 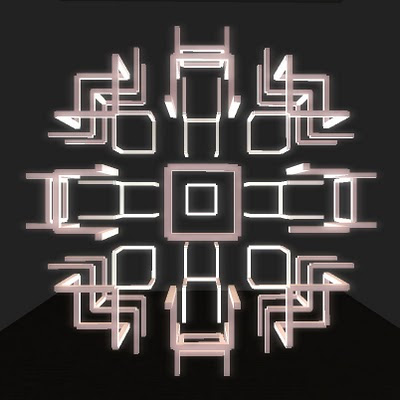 new work for the museo del metaverso (see also here) investigating once more virtual physics, but also the context of museum space. the structure uses a distance-dependent spatial scaling, which contradicts the normal perspective: its size is proportional to the distance of the nearest avatar (see my pseudo-giants). due to technical limitations of the medium, the rescaling of the structure is not smooth, but rather jerky and happens in quantized steps, as if the visitor would be able to observe the actions of the laws of optics. the consequence of the inverse scaling is that the structure plays with the rules of the museum by ignoring the boundaries of the confined space that is allocated to each artist. when seen from far away, the structure breaks out of the walls of the museum and invades the adjacent booths. but as soon as the visitor is close enough to see what is in those booths, the structure is small enough to fit in its assigned space.
Posted by Selavy Oh at 11:17 AM 1 comments