a space to talk 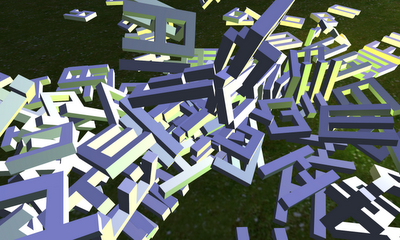 letters provided by mosmax hax
performance on tuesday august 10, noon SLT, at the Odyssey Performance Art Festival 2010 (teleport).
selavy oh will be present during the whole performance. the duration of the performance is determined by the visitors.

second performance, renamed to the limits of communicative space, saturday september 26, 1:30 SLT at ECNCS for the opening of the french Centre national du costume de scène et de la scénographie. the performance unexpectedly lasted 4523.758 seconds, that is almost 1.5 hours, and the letters used over 9000 prims. the organizer marc moana was generous enough to let the performance run until the very end.
Posted by Selavy Oh at 1:53 PM 0 comments