the pseudo-giants are based on a freely available avatar model, the noob, which has originally been created by art laxness. my version shrinks when approached by an avatar, thus contradicting the normal laws of perspective, just like mr. tur tur, the pseudo-giant in michael ende's fantasy novel for kids "Jim Button and Luke the Engine Driver".
shown at formes nocturnes and later at brooklyn is watching.
Posted by Selavy Oh at 10:10 PM 0 comments

a reaction to a discussion about the future of odyssey and to work by gazira babeli at odyssey east (the meteors in the image), this temporary large scale installation dealt with a specific aspect of space in second life: the number of available prims (building primitives). once that number is reached, building becomes impossible. the community of flexible poles, swaying gently in the virtual wind, occupied all available prim space. the space was already almost inaccessible due to gazira's work; after installing community it was not only inaccessible, but also unusable. however, every visitor, who managed to access the area despite the meteors and the slowing down of the user interface caused by the number of flexible objects, destroyed part of the installation, not temporarily or reversibly like in previous work, but irrecoverably. every member of the flexi-community, which was touched by a visitor, moaned about the intrusion and floated away for once and ever. the visitor had the choice: creating new space for new work, but acting as an intruder, or staying away from the work accepting its occupation of the space.
Posted by Selavy Oh at 7:58 PM 0 comments

three samples was conceived for the primavera exhibition at angelgate. after my previous experience at that sim, where i had to create a work without scripts and came up with decomposed, i decided to make another unscripted work, but this time completely non-interactive. it is a recording, a frozen moment in time, the application of the physics engine to a couple of prims stopped in time, and caged in a simple white box. read also soror nishi's blog post. a notecard offered a brief explanation:

"three samples" is a small static work composed of 30 white prims presented in a small white cube. The composition of the work results from a simple experiment: three poles of 10 rectangular prims each are exposed to the effect of the physics engine for exactly one second.

for the interested reader, this work is once more a reference to marcel duchamp, this time to his work on chance, the trois stoppages etalon.
Posted by Selavy Oh at 4:59 PM 0 comments 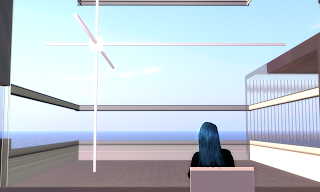 misprint thursday invited a couple of artists, among them oberon onmura and four yip, to show work at her artpounce gallery. my installation was relatively simple: part of the space was occupied by a kinetic object, the scanner, which moved in regular time intervals to a new location in a space restricted by a transparent cube. the space occupied by the scanner was not accessible to the avatars. a simple chair was placed in front, as if to provide a seat for watching the scanner. however, sitting on the chair directed the viewpoint to the avatar's face, which underwent distortion upon sitting down. here is a short text by nusch ray about the work:

When we enter Misprint Thursday's Artpounce Gallery, the left side of the first room, providing a nice view on the virtual ocean, is occupied by a moving object that reminds of a three-dimensional plotter: a small cube intersected by three bars, all moving together within a semi-transparent cubic volume of space, adopting a new position every now and then. A simple chair invites us to sit down, perhaps to contemplate the motion or to discover its underlying meaning. But upon sitting down, we first see our avatar's face undergo a horrible distortion. After that initial shock, which effectively perturbs our so accustomed feeling of embodiment, our view remains on the face of our digital representation, as if our screen turned into a mirror showing us our digital appearance. On one side the cube, carrying its own coordinate system, travelling on its random path unable to escape its impenetrable transparent cage. On the other side the viewer, thrown back to solipsistic self-reflection. This installation, simple and unpretentious, effectively works as an allegory of the medium, opposing work and viewer to each other, but separated and confined to their self-referential universes.
Nusch Ray, January 2009

a study on space

when odyssey was declared to be open for building for all members, i contributed a grid-like structure at the main exhibition area, calling it new structure for odyssey. my simple, regular grid interfered with the huge, almost chaotic and constantly transforming work of alan sondheim that was already present. alan asked me to first remove the grid to document his work in isolation, but then to put it up again. the resulting installation was constantly modified by alan, and photos from different stages can be seen at the odyssey page. for me, this collaborative work reflected the uncertainty about the future of odyssey, the past confusion, the need for a new administration, new rules, but at the same time transparency and freedom of work.
Posted by Selavy Oh at 10:52 AM 0 comments

the incomplete cube consists of 9 small cubes which can be used as seats. given that enough avatars are present, the 9 cubes change position to occupy the 8 corners of a cube and its center. the avatars are then used to form the edges of the cube. since a maximum of 8 edges can be formed, the cube created by the avatars' bodies will ever be complete. the first version, used during my talk for the finissage of systems of reference, used a triggered command, the second version shown at BiW (but unnoticed by the critics) was self-triggered once more than 5 of the 9 seats were occupied.
the incomplete cube was now nominated at the BiW wiki and here's the text written for this nomination (see also jay van buren's comment at my flickr stream):

Sometimes there is work at Brooklyn Is Watching, which is continuously overlooked. And sometimes there is work which appears to be a litmus test of curiosity. Selavy placed nine small white cubes in front of the stage, and you could sit on each one of them without anything happening. Only if five avatars would sit at the same time, the nine white cubes would reveal their mystery: they suddenly would start to move, animate the avatars, transforming them avatars into a 'living' sculptures, forming the edges of a larger cube with their bodies. Eight cubes for the eight corners, one for the center, but eight avatars being never enough to make the cube complete, to provide all its twelve edges. A social sculpture? Or a complete failure, conceptually embedded in the work? Even though there was a notecard handed out to every avatar sitting on one of the cubes, even though the nine cubes were at BiW for three weeks, the "Incomplete Cube" was only activated once when Selavy spontaneously called a group of friends to help.

the final appearance for nur moo's sim formes nocturnes consisted of a sim-wide grid, which was broken in the center, a central structure used as dancefloor (see below), and a couple of smaller features, such as an interactive gallery for nur's pictures, a gray forest by soror nishi, later on the pseudo-giants (see also blog), and the dance party environment from sintetika.


the installation at formes nocturnes was featured in several machinima, for example by colemarie soleil (her blog) or by lyric lundquist.

x
when nur moo offered me the possibility of taking residency at her newly acquired sim formes nocturnes (see npirl blog), i gladly accepted. after some considerations, of course, but i felt that the chance to use a full sim as playground wouldn't come very often. the poles, a sim-wide installation, was one of the first pieces, only shown for a very brief period of time. for those interested in the art historical reference: check out walter de maria's lightning field.
Posted by Selavy Oh at 11:08 PM 0 comments