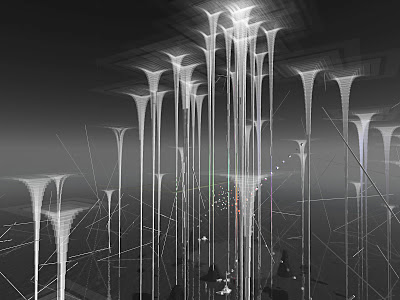 "der schauer" is an evolving and ever-changing full-sim installation for my 5-month residency november 2011 - march 2012 granted by the Linden Endowment for the Arts (LEA), which attracted over 1000 visitors. the title is german and refers to both a shower (not taking a shower, but a rain shower, a shower of meteors, etc.) and the feeling of shivering. this installation has no static elements, everything is growing, falling, changing, or rising.

pictures from the location can be found at my flickr. machinima shot on location by jjccc Coronet in mid-december, by MimesisMonday end of december, by Mab MacMoragh end of december and mid-january and mid-february. Maddy Gynoid wrote a german blog post about the installation. "What's this art" recommends the installation on her blog. Another blog post by Honour MacMillan initially misunderstood the title to be "the spectator" and i have to admit that i don't mind. Dividni Shostakovich blogged "der schauer" together with oberon onmura's "wave fields" just one sim further.
Posted by Selavy Oh at 8:50 AM