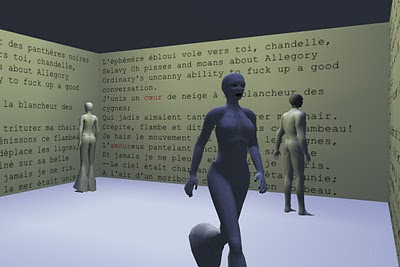 work for brooklyn is watching featuring three automated performers reciting french poems while walking in a square and changing gender. loosely connected to BiW's digital love theme. the text on the walls is generated dynamically by using the new shared media feature of second life viewer version 2. any other chat text, such as the english text in the picture above, will also appear on the walls and randomly mix with the poems.
see blog by steve millar (arahan claveau), art:21 blog post by nettrice gaskins, and machinima by mab macmoragh.
Posted by Selavy Oh at 10:45 AM