there was actually more about the miniature version of the BiW space. the mini-space was an abstraction of the original space. just as the visitors, the avatars (not being but representing the visitors), were represented by their appropriately scaled bounding boxes (their virtual-physics representation). when i worked on achieving an appropriate abstraction/representation of the original space, i realized that the easiest way would be to also transform the space itself. i placed green prims around the hedges, covered the stairs, and placed appropriately colored prims around parts of the tower. thanks to these transformations, the original, but modified space and the representing miniature space were almost exactly scaled versions of each other. constructing the representation modified the original. 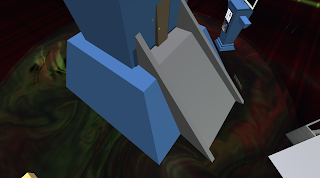 modified base and stairs of the BiW tower 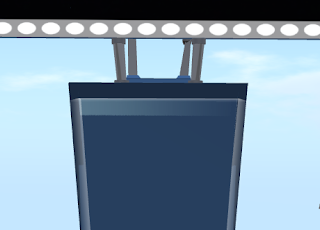 modified upper part of the BiW tower (the cabin was no longer visible)
Posted by Selavy Oh at 2:49 PM