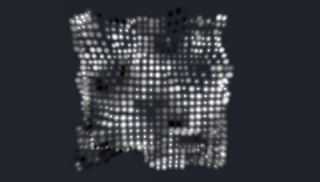 work for the contest of the Spencer Museum of Art of the University of Kansas. a slightly different version than the one in the image was submitted, and was awarded the second prize. the work consists of 27 prims and is 2.56x2.56 m. the whole area of the sim is represented by 26 prims, which scan the space, collect data on cloud density and ground level, and display these data as particle relief, scale 1:100, with the particle luminosity reflecting cloud density. since all prims are completely transparent, only the particles are visible as flickering three-dimensional pattern.
the black&white version is on display at mab macmoragh's soup project.
Posted by Selavy Oh at 12:14 PM