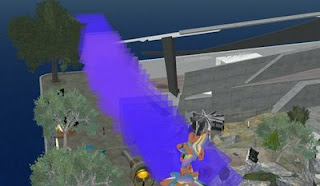 in october 2007, sugar seville initiated an uncurated show at the odyssey sim, and i installed two pieces, one of them being the blue curtain. this first version of what i called later soft structure was made out of flexi-prims to move with the virtual wind, and scripted to change color in response to the cloud density. it was my first piece making use of an inbuilt feature of second life, the virtual weather.
Posted by Selavy Oh at 10:31 AM