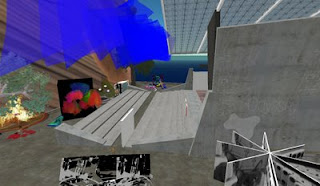 my second contribution to open odyssey was the architectural intervention, a very simple piece, which is about the question of whether creations in a digital realm are originals, and whether reusing existing elements in a different way can be regarded as work on its own. since the stairs of the museum were copyable, it was possible to make an exact mirror-copy. interestingly, sugar seville, the organizer of the show, first sent the work back not realizing that it was meant as contribution to the show. it was placed directly in front of the original stairs, thereby creating a new space that played with another missing element in sl, the mirror. later, was used by juria yoshikawa and others to place their contributions.
Posted by Selavy Oh at 11:22 PM