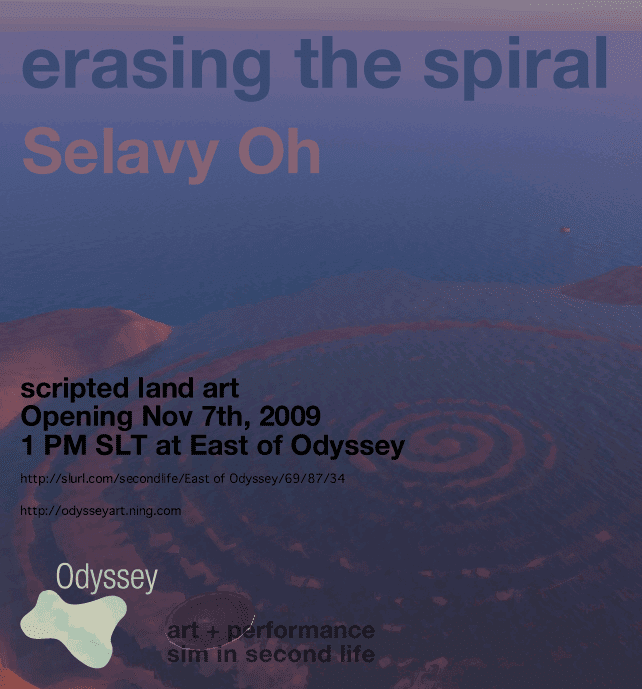 poster by helfe ihnen, 2009
Opening Nov 7, 2009, 1pm SLT at East of Odyssey. Curated by Helfe Ihnen. Text for the exhibition (see below) by Nusch Ray.
Blogged by soror nishi, tangoafton apmel, and alpha auer. further pictures taken at the opening by Helfe Ihnen, and machinima by Helfe Ihnen, bark Aabye, Saveme Oh!, and Siss Criss. Recommended in Linden Lab's destination guide. yet another blog by apmel about positive!


"A dormant earthquake spread into the fluttering stillness, into a spinning sensation without movement."

Robert Smithson, 1970
In 1970, Robert Smithson constructed the Spiral Jetty, a large earthwork in the Great Salt Lake, Utah. The Spiral Jetty was visible only for two years and then became submerged in the water of lake. Even though Smithson didn't anticipate the drowning, the idea of entropy, of the inevitable change of his sculptures by the forces of natures was a central element of his work.

"Erased de Kooning Drawing is iconic because it stands for an era when something seemingly negative could, in fact, turn out to have positive repercussions."

Vincent Katz, 2006
In 1953, Robert Rauschenberg asked Willem de Kooning, whether he could erase one of his drawings as an act of art. De Kooning agreed, and, playing his part in the performance, gave Rauschenberg a drawing that was specifically difficult to erase. This "Erased de Kooning" has become one of the most important works of art of that period. In an interview, asked what this act meant for him, Rauschenberg answered: "It's poetry".

Selavy Oh's work erasing the spiral consists of scripted terraforming covering almost the whole area of the art simulator East of Odyssey in the virtual world of Second Life. A spiral slowly emerges out of the virtual water, white spheres cover the ground like pearls, structuring the ground and reminding of the salt crystals in Smithson's work. And suddenly, like a splash, a huge wave consisting of virtual ground forms and propagates over the water, erasing the subtle traces of the spiral. Then the cycle recommences and the spiral is slowly rebuilding.
Apparently, Selavy Oh's "scripted landart", as curator Helfe Ihnen calls it, refers to both these icons of modern art. But what could be more pretentious than attempting to re-enact Smithson's work, so depending on the context of nature, in a virtual setting? And, if that was not enough, to erase it by an earthquake simulation, pretending this to be a reference to Rauschenberg?
Or did we fall into Selavy Oh's trap when asking this question? Is this the question we should ask ourselves, just to realize that we are looking at a piece of software, producing an illusion of water and earth, of creation and destruction? The reference as an illusion, pretension as calculated or simulated provocation?
But there's more about it. We, as visitors, can also trigger the wave: when we let our avatars fly and land in the shallow water, the wave is released and erases Selavy's spiral. Even the small platform, a simple representation of the space, can be used to trigger the wave by clicking on it. Doing this several times may eventually lead to complete chaos, uncontrolled waves emerging everywhere, erasing the spiral before it is even drawn.
Admittedly, this playful destruction is amusing, and watching the intertwining waves shovelling avatars and white spheres around is an enjoyable experience. Perhaps, it is this tension between sophisticated pleasure and ironic reference to art history that makes this piece an excellent contribution to Odyssey's programmatic role in the yet underestimated world of virtual art.