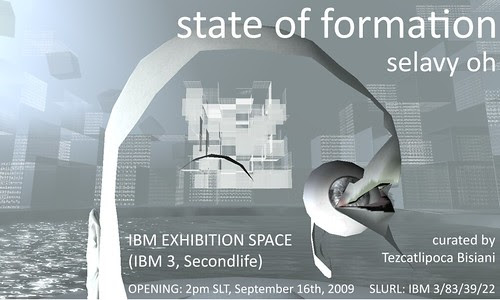 blogs about state of formation:
notecard text for the show by Mab MacMoragh:


An expressionless blank avatar turns, seeming to be a fountain statue, centered over a dark round basin.  Around the well, little black cubes crawl on a white ground splattered in black, a big white cube orbits the air generating a suspended vanishing trail in its wake, and five identical white chairs await.  All is enclosed within a constantly transforming structure of semitransparent panels screened with typeface characters.

Selavy Oh's state of formation reveals itself only to the one willing to explore the installation beyond its superficial appearance. Beginning outside, the visitor walks through moving lettered planes and leaves behind short-lived traces of landforms risen in the water ringing the center.  Finally, the visitor reaches the inner boundary to sit on each of the chairs facing the fountain--and to surrender control.  The visitor's fixed gaze is taken over in a brisk encounter with changing viewpoints and flashing images.