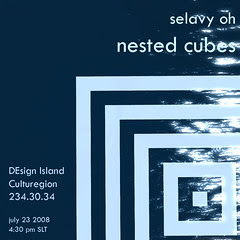 helfe ihnen invited me for an exhibition at DESign Island, and after some considerations i came up with the nested cubes. here's a text about it, written by nusch ray, for a subsequent show of the nested cubes at angelgate:

There is a huge white cube, floating in mid-air, featureless, without any texture, like a forgotten artefact of an unknown civilization. Or is it the leftover of an oblivious builder? A skybox that has not been moved to its destination? And what about the geometric shapes in the water below, almost like holes in the sea?

These might be some of the thoughts rushing through your head when you arrive at Selavy Oh's "nested cubes". But you might as well encounter something different: an arrangement of walls and holes, gaps, breakthroughs and perforations, slightly glowing from inside in subdued coloured light. You might see white bricks gently falling down; sometimes one of the geometric holes would flash in glaring white glow, and below, under the water surface, a pile of white bricks, chaotic debris of disintegration.

Selavy Oh has created an installation which is shaped by the intervention of the visitor, which only makes sense if you engage. You are invited to fly up to the white cube, straight into the featureless wall; your movement creates the holes and perforations, you fly through self-drilled corridors shining in rainbow colours. Selavy provided the material, you have to shape it, leaving your trace, trying to unveil the underlying structure, the light inside. But your intervention is destruction; you are subject to an observer effect. While you are intruding to view the work, enjoying the playful interaction, watching the bricks slowly sink like cubic snowflakes, you destroy the perfect arrangement.

The "nested cubes" never become visible. Only their shadow, the inaccessible negative space that is cutting holes in the water below, provides an idea about the interior structure of the white cube.

the nested cubes have been shown at