several works using so-called invisiprims, a visual effect first considered to be a bug, but soon used by many developers in sl. invisiprims cause the avatar body, the water surface, or other textures using the alpha channel to become invisible and have several other interesting visual effects.

the picture above was taken in my contribution for angelgate's radiance exhibition in 2008 curated by bau ur. 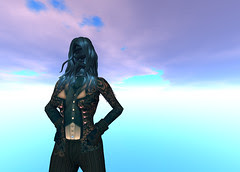 see several blog posts, for example about spatial decomposition by amy freelunch, and loose your head by jay van buren.
Posted by Selavy Oh at 3:30 PM